Nieto can help you with a development need

When you can’t find something off the shelf to solve a problem, you can turn to Nieto to help you decide what the best solution will be and give you options that fit your budget.  Nieto can you help you develop a website, a custom application, mobile app, or mine your existing data to create custom reports and dashboards.  Our Data Scientist can create powerful Power Pivot and Power BI applications that can make connections to any exist data gathering apps that you have.  We can connect to SAP, Oracle, Access, Quickbooks, excel, or virtually any type of data that is kept in an existing application that your business uses.

We will help  you select the latest technology that will best fit your needs.  The most popular languages that we’ll sort thru to help you determine which is best for you include: 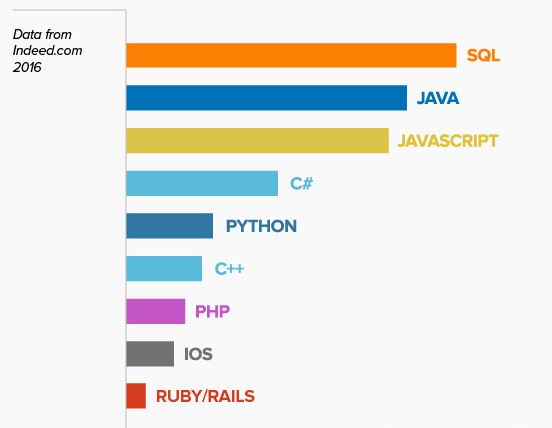 1.    SQL (pronounced ‘sequel’) it can be found far and wide in various flavors. Database technologies such as MySQL, PostgreSQL and Microsoft SQL Server power big businesses, small businesses, hospitals, banks, universities. Indeed, just about every computer and person with access to technology eventually touches something SQL. For instance, all Android phones and iPhones have access to a SQL database called SQLite and many mobile apps developed Google, Skype and DropBox use it directly.

2.    Java The tech community recently celebrated the 20th anniversary of Java. It’s one of the most widely adopted programming languages, used by some 9 million developers and running on 7 billion devices worldwide. It’s also the programming language used to develop all native Android apps. Java’s popularity with developers is due to the fact that the language is grounded in readability and simplicity. Java has staying power since it has long-term compatibility, which makes sure older applications continue to work now into the future. It’s not going anywhere anytime soon and is used to power company websites like LinkedIn.com, Netflix.com and Amazon.com.

3.    JavaScript  – not to be confused with Java – is another one of the world’s most popular and powerful programming languages, and is used to spice up web pages by making them interactive. For example, JavaScript can be used to add effects to web pages, display pop-up messages or to create games with basic functionality. It’s also worth noting that JavaScript is the scripting language of the World Wide Web and is built right into all major web browsers including Internet Explorer, FireFox and Safari. Almost every website incorporates some element of JavaScript to add to the user experience, adding to the demand for JavaScript developers. In recent years JavaScript has also gained use as the foundation of Node.js, a server technology that among other things enables real-time communication.

4.    C#  Dating from 2000, C# (pronounced C-sharp) is a relatively new programming language designed by Microsoft for a wide range of enterprise applications that run on the .NET Framework. An evolution of C and  C++, the C# language is simple, modern, type safe and object oriented.

5.    C++ (pronounced C-plus-plus) is a general purpose object-oriented programming language based on the earlier ‘C’ language. Developed by Bjarne Stroustrup at Bell Labs, C++ was first released in 1983. Stroustrup keeps an extensive list of applications written in C++. The list includes Adobe and Microsoft applications, MongoDB databases, large portions of Mac OS/X and is the best language to learn for performance-critical applications such as “twitch” game development or audio/video processing.

6.    Python is a general purpose programming language that was named after the Monty Python (so you know it’s fun to work with)! Python is simple and incredibly readable since closely resembles the English language. It’s a great language for beginners, all the way up to seasoned professionals. Python recently bumped Java as the language of choice in introductory programming courses with eight of the top 10 computer science departments now using Python to teach coding, as well as 27 of the top 39 schools. Because of Python’s use in the educational realm, there are a lot of libraries created for Python related to mathematics, physics and natural processing. PBS, NASA and Reddit use Python for their websites.

7.     PHP Created by Danish-Canadian programmer Rasmus Lerdorf in 1994, PHP was never actually intended to be a new programming language. Instead, it was created to be a set of tools to help Rasmus maintain his Personal Home Page (PHP). Today, PHP (Hypertext Pre-Processor) is a scripting language, running on the server, which can be used to create web pages written in HTML. PHP tends to be a popular languages since its easy-to use by new programmers, but also offers tons of advanced features for more experienced programmers.

8.    Ruby on Rails Like Java or the C language, Ruby is a general purpose programming language, though it is best known for its use in web programming, and Rails serves as a framework for the Ruby Language. Ruby on Rails has many positive qualities including rapid development, you don’t need as much code, and there are a wide variety of 3rd party libraries available. It’s used from companies ranging from small start-ups to large enterprises and everything in-between. Hulu, Twitter, Github and Living Social are using Ruby on Rails for at least one of their web applications.

9.    iOS/Swift  In 2014, Apple decided to invent their own programming language. The result was Swift – a new programming language for iOS and OS X developers to create their next killer app. Developers will find that many parts of Swift are familiar from their experience of developing in C++ and Objective-C. Companies including American Airlines, LinkedIn, and Duolingo have been quick to adopt Swift, and we’ll see this language on the rise in the coming years.